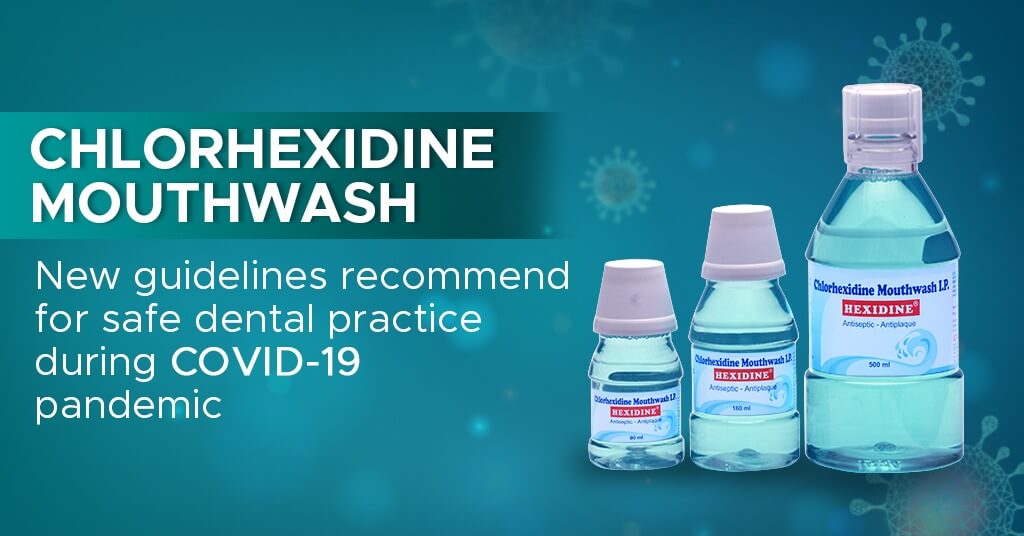 The new set of “National Guidelines” by the Ministry of Health & Family Welfare, India for “Safe Dental Practice During Covid-19 pandemic” (29 Sept 2021) now includes Chlorhexidine gluconate as an antiviral mouthwash against SARS-CoV-2.

The antiviral property of Chlorhexidine is known for five decades. Click here to read

Chlorhexidine’s antiviral effect on enveloped viruses has been known for more than three decades. The novel coronavirus SARS-CoV-2 is also an enveloped virus. Destroy the envelope and the virus gets inactivated. Click here to read

Lancet publication in April 2020 showed that chlorhexidine could inactivate SARS-COV-2 in a concentration as low as 0.05%. Currently available mouthwashes (0.2% w/v concentration) are four times stronger than 0.05%. Click here to read

If you have to choose one out of them – choose Chlorhexidine.

Let me explain that in detail.

The question is not about which chemical kills the virus. Every chemical kills SARS-CoV-2 inside the mouth & throat (and also in the lab studies). I haven’t come across a single chemical that does not kill/ inactivate the novel coronavirus in the mouth. The only question is how long will a chemical keep the viral load low in saliva/ mouth.

We want a “prolonged” antiviral action inside the mouth because SARS-CoV-2 keeps entering an infected person’s mouth from his lungs and salivary glands again & again. And from his mouth, it can spread to other people when he talks or coughs. So you need to keep the viral loads low for a prolonged period of time inside the mouth.

Even a good antiviral property is of no use if the mouthwash has no prolonged action, because within a few minutes after spitting, the mouth becomes refilled with a new viral load entering the oral cavity from salivary glands and lungs.

An antiviral molecule is of no use as a mouthwash if it has no persistent attachment, sustained release, and prolonged action inside the mouth.

However, to achieve long periods of low viral load in the mouth & throat, you can’t keep rinsing & gargling every now & then.

Instead you want a chemical that stays attached to the tissues and exerts a long and sustained antiviral action inside the mouth after a single rinse.

Substantivity: a unique property of Chlorhexidine

Based on the discussion above, we can say that only that chemical, which

– is capable of giving a prolonged antiviral action in the mouth & throat.

This property is called ‘Substantivity’ exhibited only by Chlorhexidine & no other mouthwash.

Prolonged action is the USP of Chlorhexidine mouthwash. So even if the virus enters the mouth again it will be inactivated by Chlorhexidine molecules which will still be available inside the mouth, attached to the tissue surfaces.

An article in British Dental Journal, 1999 classifies all mouthwashes into three groups, with only the first group displaying the property of Substantivity – and only Chlorhexidine is present in this group. None of the other molecules – povidone-iodine, essential oils, CPC, hydrogen peroxide – comes in the first group.

Post-rinse action: Chlorhexidine vs other mouthwashes

Chlorhexidine, due to its strong tissue binding properties, remains attached inside the mouth and continues to act even after the person spits it out after rinsing. This is “post-rinse action”.

Whereas other mouthwashes exhibit antiviral action only when they are being rinsed. They don’t exhibit substantivity. You spit them out after rinsing – their action stops. So, no post-rinse action.

A single rinse with chlorhexidine reduced the SARS-COV-2 viral load in the mouth for 2 hours, which can help reduce the viral transmission in the pandemic.
Click here to read

Taking it further, a March 2021 study states that four days of chlorhexidine use eliminated oropharyngeal SARS-COV-2 in Covid-19 patients.

In comparison, only 5.5% of people from the control group were able to achieve it.
The number of people who eliminated the virus rose to 86 % when they also used a chlorhexidine oropharyngeal spray along with the mouthwash (vs. 6.3% control).

Hence, if you use chlorhexidine mouthwash to rinse the mouth and gargle the throat, you will control the infection more effectively.

The study says that chlorhexidine is a simple and safe addition to current COVID‐19 prevention guidelines and may significantly reduce disease spread.

There are two concentrations – 0.12% and 0.2% . Go for 0.2% Chlorhexidine because it shows greater substantivity. Click here to read

There are Chlorhexidine mouthwashes – with and without anti-discoloration systems (ADS).

Use plain chlorhexidine mouthwash – those without ADS. Reasons:

Hence, to prevent the spread of SARS-CoV-2 choose plain chlorhexidine mouthwash (0.2%) – that way you will get antiviral action as well as substantivity.