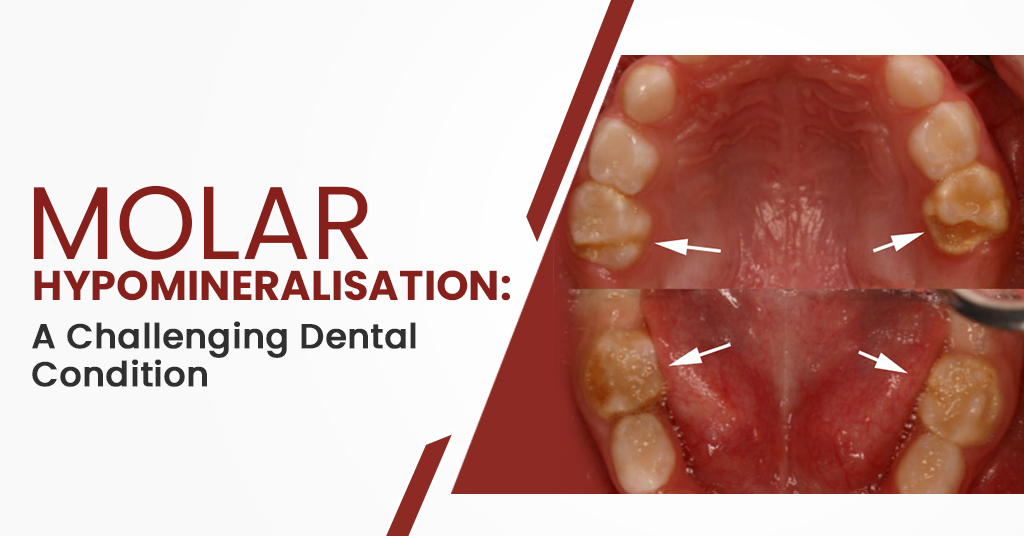 This blog is based on the article ‘Molar hypomineralization: What is the US experience?’ that appeared in The Journal of the American Dental Association

Molar Hypomineralisation (MH), is a prevalent condition characterized by demarcated opacities in enamel that appear both discolored (white, cream, yellow, or brown) and sharply bordered against normal enamel. Molar hypomineralization, since first recognized, has been a complex condition that has been puzzling and interpreted as a distinct phenomenon, unlike other enamel disturbances.

MH is the most common manifestation of what is popularly termed chalky teeth. Although MH can lead to several problems – the three main issues for sufferers are sensitivity (dental pain or toothache), crumbling and potholes leading to increased risk of decay (dental caries), and unsightly appearance in the case of front teeth developmental dental defects.

The biggest question that arises is that why there is such little study on such a prevalent dental condition. The popular epidemic of childhood caries has preoccupied dentistry leaving very less focus on the subject of MH as a condition. Molar hypomineralization (MH) has been the subject of more than 75 studies worldwide over the past 30 years and yet the nature of the condition and its cause remain unclear. Is it not time to focus attention on this problem with the help of a global campaign that will promote the need for research into chalky teeth?

MH is surprisingly highly prevalent and therefore accounts for a substantial proportion of childhood caries. On an average worldwide, 1 in 6 children has affected 6-year molars. Dental pain is also common in MH, even in mild cases when the opacities appear. Furthermore, pain-compromised tooth brushing can reduce the effectiveness of standard preventive dental care, which often fails on hypo mineralized

molars; the widespread claim that childhood caries is preventable can be misleading in this regard. One of the other consequences of MH is discolored anterior teeth might that may cause cosmetic concern. Both the dentist and young patient have to face treatment challenges. As a consequence affected families may face substantial financial and quality-of-life costs over decades.

The MH problem can be effectively combated in 3 ways – education and advocacy across a broad range of stakeholders, collective effort to undertake research into better clinical management and ultimately medical prevention. Molars are already the most caries-prone teeth. When molars are severely hypo mineralized, they may have a 10-fold higher risk of developing caries.

World’s first clear-cut description of demarcated opacities and their association with caries-prone 6-year molars was provided by a 1949 study in Connecticut, USA. 30 investigations have been conducted on MH and despite this the causes of MH are unknown. Most findings implicate systemic illness or its treatment, specifically during infancy in the case of 6-year molars. If advances continue MH and its associated caries burden may become preventable through medical intervention.

Although a prevalent dental condition worldwide, it seems fair to say that there is floating ignorance about MH worldwide. Reasons include

-educational deficit across the sector, scant attention at best in the educational resources of most professional organizations, perhaps in some dental schools too and three MH is clinically obscure for many.

From the medical perspective, pathologic onset happens invisibly within the jaw long before tooth eruption. Orally, some misname it usually as hypo plastic molars while others see it as caries, and many others have little opportunity to look. An estimated annual incidence of approximately 670,000 new cases that involve 6-year molars is spread over approximately 400,000 dentists and hygienists In the United States. With these challenges, it doesn’t come as a surprise that the problem remains

poorly translated through to public health and research domains. Recent progress with dental erosion, another neglected problem, provides optimism, however.

The multiple challenges stated calls for a translational approach to their solution. These efforts should be addressed across the educational, research, and health care areas. The D3 Group (D3G) is a world-first translational network and educational resource that strives to seek better understanding and care of people with D3s (Developmental Dental Defect) such as chalky teeth, focusing scientifically on its prevention. D3G strives to develop flexible terminology and other tools for messaging consistently across the sector. The campaign for Chalky Teeth explains the link between childhood caries and MH and advocates for research into the cause and prevention of this and other D3s. With support from numerous American stakeholders, D3G welcomes participation from others interested in teaming up to fight the MH problem globally.